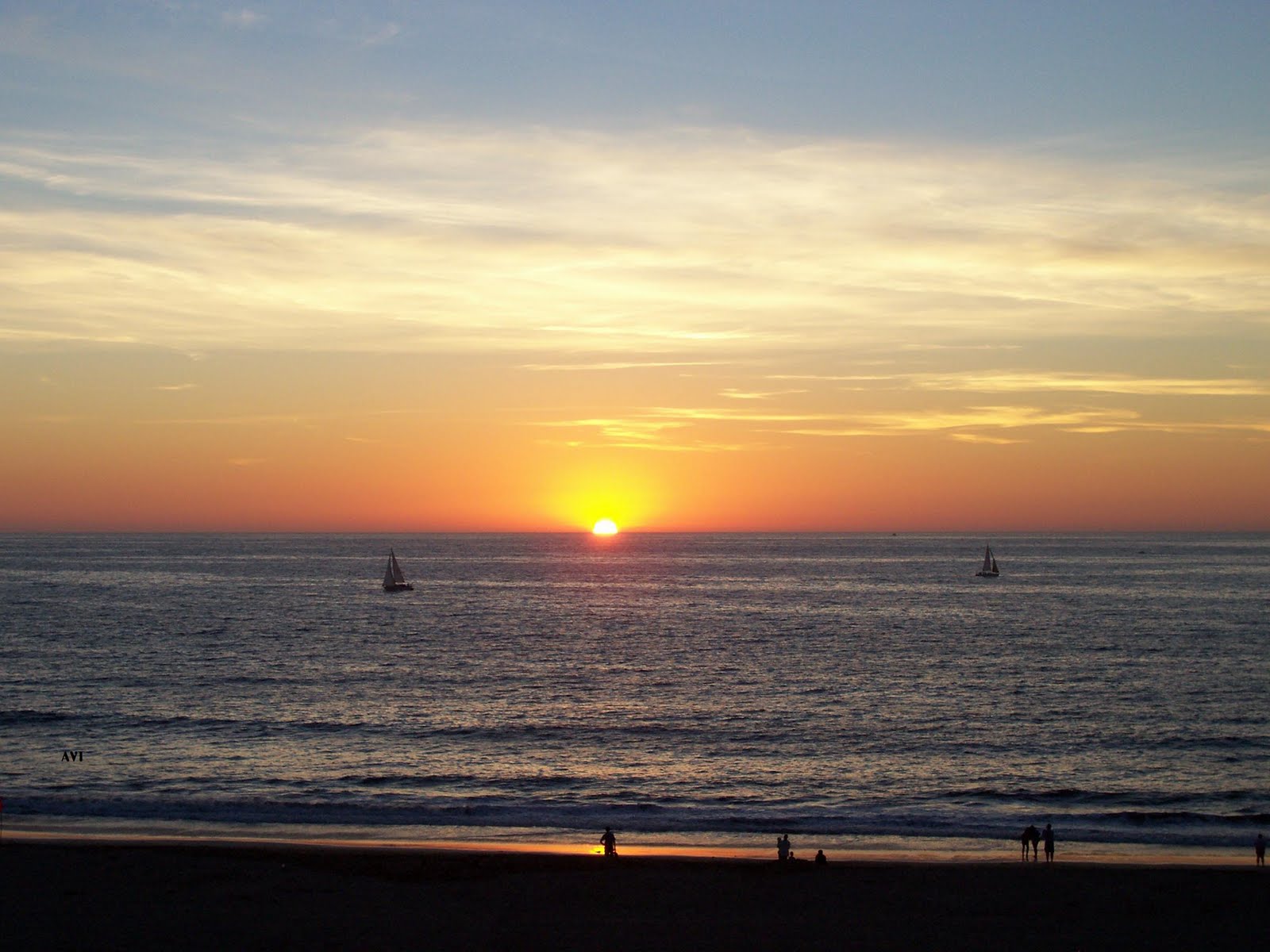 I remember sitting on my south-facing, top-floor balcony for hours watching the waves break and feeling the power of those waves reverberate through my building in the form of minute vibrations.  I would soak-up sun there on the third-floor looking out to the ocean from that courtyard-style building amid an impressive collection of exotic flowers, weird plants, and cacti, all of which seemed to collect there on my balcony over time and forever seemed to thrive upon their arrival.  (I’ll try to find a photo somewhere to upload to show how awesome it all really was in a cozy sort of way – at least to me.)  I mean, I had a job, but whenever I was not working or road-tripping to the desert or something, I was hoping to be on that balcony watching the ocean.  It was merely a comfortable one-bedroom apartment with a balcony but with the most fantastic of views.  And, not that I mean to brag, but it was just a fantastic location all year-round!  Like…, a non-stop ocean-front vacation in SoCal.

But even with all that, an even more impressive thing about the whole experience, in my opinion, was that a there seemed to be a pod or team of dolphins that also called those waves and that area of the South Bay/Redondo Beach shore home as well.  I remember how I would watch for the dolphins from my balcony.  If they did not appear earlier, the dolphins would almost always show-up during early-dinner time without fail, say around three o’clock in the afternoon or so.  From my balcony I would sit and watch the dolphins as they swam out beyond the break and try to determine how many different ones comprised that local pod.  Then, when sets of really big waves would roll-in (sometimes with maybe even with like 25-foot faces in the winter), to watch those dolphins body-surf struck me like magic not to be seen anywhere else – as they could be seen riding/moving inside and through the crest of the wave and body-surfing down along the line of the wave.  Of course, the dolphins could always swim much faster than the wave could move, so it really made no difference to them how big the waves were.  In fact, the bigger dolphins only seemed to care to body-surf if the waves were very, very large.

As an avid swimmer and enjoyer (sic:) of surf, I also would spend a significant amount of every day in the water swimming and playing in the break.  And not that I would really ever worry about it much, but I remember thinking that it was at least somewhat reassuring to know those dolphins were probably in the area and they might choose to keep any less-nice, non-mammal creatures from the deep at-bay.  It was also oddly reassuring to know the dolphins were there (somewhere) whenever I would get caught out in the ocean when sets of the seemingly massive waves rolled-in too.  Like I would think to myself, ‘if I get really slammed by one of these waves, maybe those dolphins will come to my aid and rescue me’ – or so I liked to think was possible anyhow.  ‘Cause when the really big waves would roll-in on me, I would have to seemingly swim like 3/4ths of a mile out from the shore to be outside the break.  As these waves had a steep face and were typically totally walled-up, so to go 'over the falls' or to get tossed by one of the really big waves could easily be life-threatening – without any luck, anyhow.

Often times as I was exiting the water, folks/strangers from the beach would approach me and ask if I had noticed the dolphins that were apparently swimming right next to me when I was in the water.  Sometimes I had noticed, most of the other times I did not.  Even friends who would sometimes sit on the beach as I swam would say, ‘I can’t believe you didn’t see that dolphin right next to you!  It was with you for a long way down the beach!’ But sometimes as I was in the water, I would see the dolphins approach surfers down-beach and seemingly allow the surfers to pet them – which I always thought was pretty cool.

So anyway, for the most tripped-out memory of it all, over time it seemed that the dolphins became familiar with me and it seemed like they began to recognize me outside of the water as well.  What’s more, it was like they would show up and wait for me to come down off my balcony to join them in the ocean.  It was if somewhere inside of me I could sense them calling to me, for some unknown reason.  It was kind’a bizzare and I suppose you sort-of had to be there to understand.  But to that end, when women-folk would come over for a visit, they would joke to me that my dolphin friends were out there waiting for me to get in the ocean.  It was like the pod would swim around out past the break, maybe looking for fish or whatever, until I would go down to the beach for a swim.  When I would get down to the beach and begin to prepare for entering the water, the dolphins would then come in closer to the shore, as if to say hello – like, they would even then be mulling-around inside the break.  Then it would often seem that they would come and join me for body-surfing in the break – at least if there were any decent waves to make it worth the dolphins’ time.  I remember trying to figure out if it were even possible for the dolphins to see/view me way up there on the balcony or even standing on the beach.  Of course, I never really knew for sure, either way.  (For one of my prior blogs where a dolphin was playing alongside me in the break see:  “The Dolphin Inside the Break.” http://adamvernontrotter.blogspot.com/2012/05/dolphin-inside-break.html   .)

I eventually came to realize that if I started doing my favorite thing in the water, if the dolphins were not present, this would often seem to cause them to show-up.  What it entailed was for me to sort-of hang around inside the break and wait for a good-sized wave to show on the outside horizon– mind you I always wore swim fins and even webbed gloves to have as much power available as I could muster.  As the wave began to crest, I would swim full-force as hard as I could at the wave.  I would then swim up the face of the wave and launch myself through and out of the back side of the wave.  Somewhat like a dolphin (or more likely, a whale by comparison) when it breaches.  Given a big enough wave, I could sometimes launch my whole body out of the water.  I even began to spin like we see them do sometimes.  After doing this for several waves, it would seem the dolphins would show-up to see what all the commotion was about.  :)  Sometimes I would even notice that people would stop up on the road to watch me too, because I guess maybe it was not all that common to see any surf-players swimming or riding against the waves.

But over the course of time, patterns developed in that the dolphins would appear when it was about my time of day to head into the ocean for a swim and some body-surfing.  This was usually at a time later in the afternoon but when the sun would typically still be warm.  Of course, the strangers and tourists would repeatedly come up to me as I exited the water to ask if I noticed the dolphin that was swimming “…LIKE…, IT WAS RIGHT NEXT TO YOU…?!?!?  Like…,when you were swimming down the beach, it was swimming right next to you the whole time.”  I can only imagine that it must have looked as though I was ‘walking a dog,’ with the dog being a dolphin, of course.  Or, more to the point, the dolphin was ‘walking me’ – or ‘swimming me,’ as the case may have been.  Some of the tourists would even argue that the dolphins were sharks, at least until I explained how easily one can tell the difference by the tail structures and therefore the difference in motions between the mammals/dolphins and the sharks as well.  Either way, I always couldn’t help but to chuckle about it all.

So, as the job that I had then eventually came to an end (along with so many other jobs in SoCal at that time), the fantastic ocean-front/dolphin-front apartment did likewise.  But I managed to stay-on in the apartment for a good while with no employer requiring my attendance anywhere.  I just hung-out on the balcony, jammed-out with good tunes and friends, and looked to go swim with the dolphins whenever possible.  This went on for quite some time thereafter.  Also during those endless months, I noticed the dolphins’ schedules again began to mimic mine, or so it seemed anyhow.  Like…, the time of day that I normally would head to the beach for my swim, say one o’clock to two o’clock in the afternoon, is when the dolphins would start to surface beyond the break.

After vacating the apartment, I always sort-of wondered if the dolphins would remember me when I would go back to Redondo for a swim – which I still did for some amount of time thereafter.    Interestingly enough, at least for some period of time, it seemed to me that they did.  But what do I really know, ultimately.  Right?  Maybe the dolphins are just ‘nice-guys’ and are friendly to everyone.  :)

Again, Another of my humorous dolphin memories can be had at:
The Dolphin Inside the Break.
http://adamvernontrotter.blogspot.com/2012/05/dolphin-inside-break.html

See also (My other blog where I had posted the photo above/part of the view from my balcony):
Enjoy the Sunset: Redondo Beach, California
http://theultimateroadtripamericac2c.blogspot.com/2010/10/catch-sunset-redondo-beach-california.html


Oh yea…, per chance anyone doesn’t understand what I mean by ‘body surfing,’ read this one, maybe.
Body Surf Atlantic City….
http://theultimateroadtripamericac2c.blogspot.com/2010/06/body-surf-atlantic-city.html